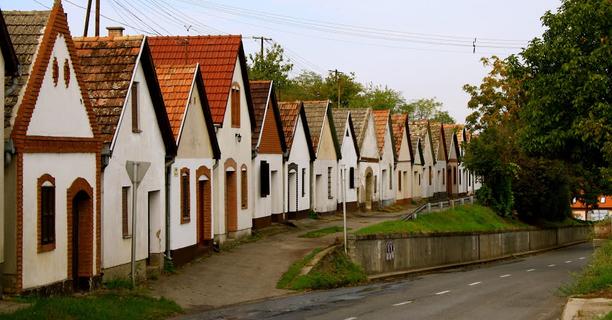 The Duna wine region, the largest wine-producing area in Hungary, occupies the plain between the Danube and Tisza rivers in the center south of the country and comprises some 26,000 hectares of vines, divided by three wine districts: Csongrád, Hajós-Baja and the Kunság. The climate here is quintessentially continental, as it is in much of the country, with hot summers and cold winters. The soil patterns show little variation: the bulk of the region has calcareous sandy soils, although here and there brown forest soils, chernozem, meadow and alluvial soils occur as well. Most of the sand consists of alluvium deposited by the meandering Danube over the millennia.

Duna has 5 districts with protected designation of origin:

The Csongrád wine district stretches 100 km on either bank of the Tisza River in the south of Hungary, in a flat plain formed by the Tisza, Körös and Maros rivers and their tributaries. The elevation never exceeds 120 m.

The climates is defined by continental influences that prevail in much of Hungary, although in some years Mediterranean influences are noted as well. At 2,200, the annual number of sunshine hours is the highest in the country. Precipitation only averages 450-500 mm, but the rivers traversing the region – principally the Tisza and its backwaters – contribute favorably to the water supply and create optimal humidity conditions for growth and ripening.

The predominant soil consists of sheet sands typical in alluvial conditions, with some occurrence of brown forest soil, chernozem and meadow soils. Sand soils are distinguished by the ability to warm up fast and reflect the sun better due to their light color, which is obviously beneficial to the vines. More than that, the quartz content of theses soils make them immune to phylloxera.

Occupying the northern reaches of the Telecska Hills in the south of Hungary, the Hajós-Baja wine district is delimited by the Danube on the west, the sand ridges between the Danube and Tisza rivers on the north and the east, and the national border on the south. The diversified terrain mostly consists of hills and valley trending northwest to southeast, which provide favorable conditions for growing vines. The typical elevation is 150 m above sea level, with fluctuations as high as 10 to 20 m. The incline of the slopes varies between 2 and 10 %.

The climate is defined by continental influences that prevail in much of Hungary, with a hot summer and a cold winter. These conditions, combined with the relatively low elevation make the area prone to frost in the spring and in the fall. The annual mean temperature is 11-12 °C, while the number of sunshine hours exceeds 2,000 hours. Precipitation levels vary in the narrow interval between 450 and 500 mm, which is sufficient for vines in terms of sheer quantity, but its distribution over the year is quite uneven.

The prevailing soil type is sheet sands over loess, both humus-enriched and quick sands. In some places, brown forest soil, chernozem, meadow and alluvial soils are also found.

The Kunság wine region is situated in the center of the country, with most of its territory falling between the Duna and Tisza rivers and the Tiszazug region. On the northwest and the north, it includes certain grape-growing areas of the Csepel Island in the Danube and, respectively, of the Gödöllő Hills. The terrain is essentially a flat plain throughout, with an elevation below 150 m with a variation of less than 10 to 20 m.

The climate is defined by the continental influences that prevail in much of Hungary, with a hot summer and a cold winter, and an annual mean temperature of 10-11 °C. Days with scorching heat occur commonly during the vegetation period, particularly in July and August. Insolation exceeds 2000 hours a year, precipitation is 450-500 mm.

The prevailing soil type is calcareous sand, both humus-enriched and of the quick sand type. In some places, brown forest soil, chernozem, meadow and alluvial soils are also found. Sand soils distinguished by the ability to warm up fast and reflect the sun better due to their light color, which is obviously beneficial to the vines. More than that, more than 75 % of these soils consists of quartz, which makes them immune to phylloxera. On the downside, they have an inferior water retention ability as well as lower concentrations of nutrients and minerals.