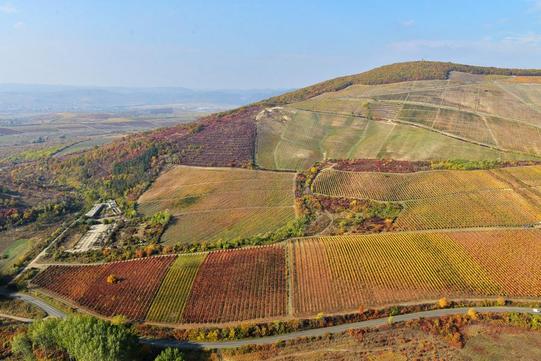 Northern Hungary is one of the country’s wine regions that are yet to be designated by statutory means. Most of the growing area occupies altitudes of 200 to 300 m on the slopes and plateaus of the Mátra and Bükk mountains overlooking the Great Plain, although in some places, such as the Nagy-Eged Hill, the vineyards are planted at elevations as high as 500 m above sea level. Comprising a total of some 13,000 hectares planted with vines, the region includes the Bükk, Mátra and Eger wine districts. The climate is shaped under the main influence of the mountains that make up Hungary’s Northern Range, whose peaks shelter the vineyards from cold northerly winds. The predominant soils are diverse brown forest soils (Ramann’s, chernozem, banded, erosional), as well as loess, black erubase and brown forest soils evolved over volcanic rhyolite tuff. Some locations are characterized by sheet alluvial sands or brown forest soils over calcareous marine sediments.

Northern Hungary has 4 districts with protected designation of origin:

Defined by the Bükk range whose peaks protect the vines from cold northerly winds, the climate is prone to extremities. During a harsh winter, which is not uncommon in the area, the vines are only protected from damage by the altitude (above 150 m) and the unimpeded flow of the cold air mass through the rows. Spring generally arrives late and frost often sets in as early as late October. The number of sunshine hours is 1950-2000; annual precipitation is low at 500-550 mm. The climate is generally dry and cool.

The Eger wine district is situated at altitudes of 160-180 m between the Mátra and the Bükk mountains where the Northern Range meets the Great Plain. From the east and the west, the main valley os bordered by hills varying between 200 and 300 m in height. North of the eponymous city of Eger is the looming bulk of the Nagy-Eged Hill rising more than 500 m above sea level.

Apart from the sheet alluvial sands in the communes of Verpelét, Feldebrő, Aldebrő and Tófalu, the district is characterized by various brown forest soils evolved over volcanic rhyolite tuff, including the Ramann’s, chernozem, banded, and erosional types. With a few exceptions, the vineyards are planted on the plateaus and their gentle slopes with a southern, eastern or western exposure. Towering above them is the already mentioned Nagy-Eged Hill with its brown forest soil over marine limestone sediments and the Mész Hill with its characteristic andesite bedrock.

Stretching east to west in northern Hungary, the Mátra is the tallest range of mountains in the country, and at once the largest wine district not counting those on the plains. Protected from cold northerly winds, the sunny southern slopes are ideally suited for the production of excellent quality wines that also benefit from the local soils, either volcanic in origin or of the nutrient-rich sedimentary type.

The climate is subject to the continental influences that dominate throughout most the country, with insolation of 900-2000 hours, and annual mean temperature of 10.5 °C and an average temperature as high as 17 °C during the growing season.