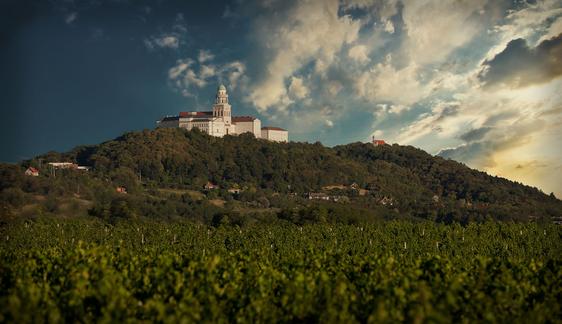 Northern Pannonia is one of the country’s wine regions that has not yet been officially designated as such. It comprises five smaller districts of Northern Transdanubia with a total of 6,500 hectares under vines in the northeastern part of Transdanubia Hills, including the slopes of the Vértes, Buda, Gerecse, Kőszeg, Sopron and Velence ranges, as well as in the separate Pannonhalma Hills, at altitudes of 150 to 400 m.

Northern Pannonia has 5 districts with protected designation of origin:

A district in the northeastern part of the Transdanubian Hills stretching from the south of the Gerecse range to the Velence and Buda ranges, where the vines are planted on the slopes and plateaus.

With annual mean temps of 9,5-10,5 °C, the climate is cooler than the Hungarian average. Annual precipitation is 650 mm, most of which falls in the growing season. The district is continually windy, with dominant winds from the northwest bringing cool air.

Located in Fejér County, in the Mór Valley trending between the Vértes and Bakony ranges, the district has a terrain characterized by buttes topped with gravel, broad, longitudinal ridges, and articulated, gently sloping foothills.

Although cooler than the average, the climate is favorable for grape growing. The air moves around the area throughout the year, with the main direction defined by the Mór Valley separating the Vértes and Bakony ranges. Winters are mild, and in the summer most of the vines bathe in the sun the entire day. The annual mean temperature is 10 °C, with average light conditions and 600 to 650 mm of precipitation. Summer has the most rainfall, while February and March are the least rainy months. Generally, cool and relatively wet conditions prevail.

The Vértes is a range of low hills characterized by upthrusts and troughs. Lassivage brown earth and forest soils formed mainly over loess, loess mixed with limestone debris, and Oligocene sands, while dolomite and limestone rocks are overlain by rendzina soils.

With most of its vineyards planted in the western section of the Gerecse range, the district is delimited by the Danube on the north and the Kisalföld ( ’Small Hungarian Plain’) on the west.

The Danube River, a large body of water, reflects the rays of the sun back to the vineyards, particularly during the afternoon hours, creating a unique microclimate that is well suited for growing vines on the gentle, north-facing slopes. The rolling hills, along with the Danube’s modification of the moderately wet and cool weather with slightly fewer sunshine hours than the

Hungarian average, are conducive to wines rich in aroma and flavor. The climate and the weather pattern are free from extremities. The number of sunshine hours is 1950-2000; the annual precipitation is 550-650 mm.

The prevalent soil types are brown forest soils mostly overlying marl in the west, as well as loess, limestone, dolomite and sandstone in the east.

The Pannonhalma Hills rise to a height of 200 to 300 in the south of Győr-Moson-Sopron County, and are dissected into three sections (named Pannonhalma, Ravazd-Csanaki, and Sokoró) by two major valleys, the Pannonhalma and Tényő Valleys.

The local climate is influenced by the agro-ecological environment of the Bakony Hills, the Győr Basin and the Marcal Basin. The tempered weather is characterized by average light and heat conditions and a good supply of rainfall. The annual mean temperature is 10 °C and the average rainfall is 550-650 mm. There are more than 1,950 sunshine hours during the year.

The bedrock of the Sokoró Hills consists of Mesozoic or Paleozoic crystalline rocks and limestone is overlain by Pannonian sediment sequences of a widely varying real thickness, such as blue-gray clay, fine and coarse-grained Pannonian-Pontian sand, and sandstones. The sedimentation probably began in the lower Miocene along the shallow shoreline zone of the Pannonian Sea, and was mainly of alluvial origin.

The vineyards are planted on the slopes of the Sopron and Kőszeg Hills and around Lake Fertő, at altitudes between 150 and 400 m above sea level.

Lake Fertő exerts a major influence on the local climate, which ripens grapes reliably with a tempered winter, a moderately hot summer, and a generally long and sunny fall season. Vines are mainly cultivated on the northwestern and southwestern slopes that are less prone to frost pockets. The winds decrease humidity except in Fertő Basin, where misty autumn mornings are known to promote botrytis. The annual number of sunshine hours is between 1900 and 2000; rainfall is 550-650 mm.

While eroded brown forest soils dominate throughout the district, patches of loess and even cohesive clay soils occur as well. Vineyards are often quite stony, the most common rock types being mica schist, limestone, calcite and quartzite.