The Pannon wine region consists of the undulating country in the southwestern part of Hungary delimited by the Danube and Drava rivers and Lake Balaton, including the more southern slopes of the prominent ranges of Villány and the Mecsek. The region’s 8000 hectares of vines are shared by four wine districts: Pécs, Szekszárd, Tolna and Villány. The continental climate is shaped under Mediterranean influences from the south. The bedrock underneath the hills in Tolna and Baranya consists of clayey sedimentary rocks overlain by loess and adobe. The same soil types also often occur over the limestone corpus of the taller Villány and Mecsek ranges.

Pannonia has 5 districts with protected designation of origin:

The Pécs wine district is situated on the sheltered southern slopes of the Mecsek, the gentle hillsides around Szederkény and Mohács, and the southeastern slopes of the Zselic Hills, forming a belt stretching 80 km east to west between Dunaszekcső to Szigetvár. The vines are planted at altitudes of 110 to 300.

The sub-Mediterranean climate is shaped under three decisive factors: the Mecsek Hills and influences from the Atlantic and the Mediterranean. Winters are mild and, beneficially for vine growth, warm days set in early in the spring. On average, there are 210 frost-free days a year. In the shelter of the peaks, the forests produce relatively warm local winds which help mitigate the risk of frost during the transitional period. The annual mean temperature is 10.5-10.8 °C.

The rock source of the area’s soils consists of Pannonian sediments and loess mainly in the west. Triassic limestone also occurs in higher elevations, and there are patches of Permian sandstone, for instance in the Jakab Hill, and Permian shale. Erosion created black and red clay varieties of rendzina soils, and weathered Werfen shale. In the vicinity of Versend, Szigetvár, and the Eastern Mecsek, the predominant source of rock is loess. The soils produced by Red Permian sandstone and shale do not contain lime, while those evolved over weathered limestone and loess tend to be more or less calcareous.

The Szekszárd wine district stretches over the Szekszárd Hills and the northeastern reaches of the Geresd Hill, both trending north to south, and is delimited by the 681-m tall Mecsek range to the west and the Sárköz Plain with the Danube to the east, home to the famous Gemenc nature preserve.

The climate is shaped by the Atlantic and the Mediterranean to a decisive extent, but retains its overall continental character and is subject to a particularly powerful influence by the Danube. The river’s large body of water reflects the rays of the sun and help tone down wide swings of temperature. On the average of many years, insolation reliably hits the 2,050-2,100-hour mark. The hot, sunny summer season and a long Indian summer for much of the fall enable even late-ripening varieties to ripen with good sugar degrees. The annual precipitation in Szekszárd is 598 mm, just sufficient to ensure the normal development of the vines. The annual mean temperature is 11.3 °C.

Made up by diverse, irregular ridges, sequences, and erosional valleys forming a zig-zag pattern, the Szekszárd Hills have intact fault scarps with broad (100-200 m) plateaus rising 100-150 m above sea level. The sequences, ridges and plateaus are covered by a loess mantle 20-40 m thick, while the fault scarps and the bottom of older erosional valleys are overlain by a thin (1 to 7m) layer of loess talus. Ramann’s brown forest soils in varying degrees of erosion are prevalent, but erosional loess soils are also quite common.

Most of this wine district in southwestern Hungary belongs to Tolna County, yet some of it stretches over to Barany and Fejér Counties. The vines are planted on gentle slopes with a southern exposure that are sheltered from northerly winds.

Moderately hot and humid, the local climate is characterized by up to 2060 hours of insolation and an annual mean temperature of 11.8 °C on the average of many years running. May and June are the rainiest months; the prevailing winds are northwesterly.

The most important parent rock is loess, but a smaller portion of vineyards are planted in sandy soils. In places, brown earth (Ramann’s brown forest soil), lassivage brown earth, and calcareous chernozem are also found.

The wine district comprises the southern slopes of the Villány range, which rises dramatically from the surrounding plain.

Due to its geographical situation, Villány enjoys a quantity and length of insolation far above national norm. The annual mean temperature is around 11°C, while the average temperature during the vegetation period is 17.5 °C. Precipitation is 700 mm based on the average of many years. The continental climate is mixed with Mediterranean influences, the latter being particularly strong on the south-facing slopes. Villány is a moderately wet area, with a milder winter, a relatively even distribution of precipitation through the year, and only modest fluctuations of temperature. The prevailing wind is north-northwestern, but air movement west to east is also quite frequent.

The bedrock of the Villány range consists of middle-Triassic limestone and dolomite, limestone from Jurassic marine sediments, and limestone dating from the Lower Cretaceous. This bedrock  produced mostly chernozem type brown forest soils. The parent rock of the soils is loess and loess-like colluvium formed during the cold and dry phases of the Pleistocene. The high concentration of lime causes the base rock to weather easily and thus to evolve fertile soils – clayey loess rich in lime and of varying thickness on the slopes, often replaced by rendzina on the ridges and plateaus. The thickness of the subsoil overlying the parent rock varies from vineyard to vineyard, but the general tendency is for thick and nutrient-rich soil layers. 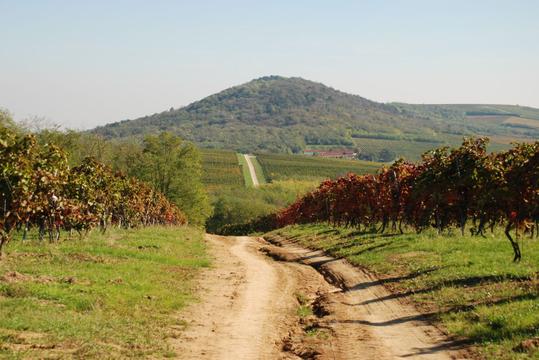